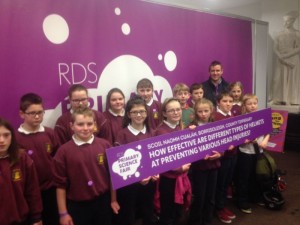 Welcome back to school after what we hope was a wonderful and exciting winter break spent with family and friends. The second half of the school year is well underway with staff and students once again actively engaged in teaching and learning.

The Feast of the Epiphany was celebrated on the 6th of January. Children from all classes went to mass on that morning. It was a great start to our new year.

Scientists of the future!
The fifth class students of Scoil Naomh Cualán participated in the BT Young Scientist exhibition last Friday in the R.D.S. Their project was on the effectiveness of different helmets at preventing brain injuries.
Fifth and sixth class researched both the causes and effects of concussion.
It is a problem that is getting worse in heavy contact sports.
Fifth class then conducted a series of experiments on a variety of helmets using melons to represent the skull and brain. Everyone had great time dropping the melons and analysing the results!
The project was very well received by the judges, RDS members and the general public. Fifth class have been set the task of designing and making a new type of sports helmet for next years exhibition!
Everyone had a great time at the RDS and we even have a few t.v. stars in Scoil Naomh Cualán now!
Well done to all the students who worked so hard and represented our school with distinction.

Mrs. Murray has started a social games lesson with  the children in the senior side of the school. For the next few weeks, the children will learn how to play draughts. A competition will be organised towards the end of the month to find the Draughts ‘King or Queen’.

Congratulations to our fourth class pupil, Liga, who won first place in the 8-10 year old category of the Credit Union Art Competition. The theme of the competition was ‘Happiness’. Liga drew a beautiful picture of all the simple things in life that make her happy.

Children from second to sixth class started swimming lessons in Nenagh Swimming Pool. They are thoroughly enjoying the lessons every week. It is fantastic to see the progress that the children are making. Children who were initially unable to swim, have the skill mastered in two weeks.

A huge congratulations to Colm, Andrew, Valerie and Emma who fought off stiff competition and  came first in the senior section of the Credit Union Quiz, in Templemore on Friday, 29th January. Luke, Eoghan, Archie and Harry came second in their category which again was a huge achievement. We are extremely proud of all the boys and girls on their success. The older children are now through to the next round of the Quiz which will be held in Thurles in late February.

Fourth class had great fun learning all about magnets with Ms. Gorman. They even got to make their own animal magnets.